How to Identify Asbestos Present In Your Home 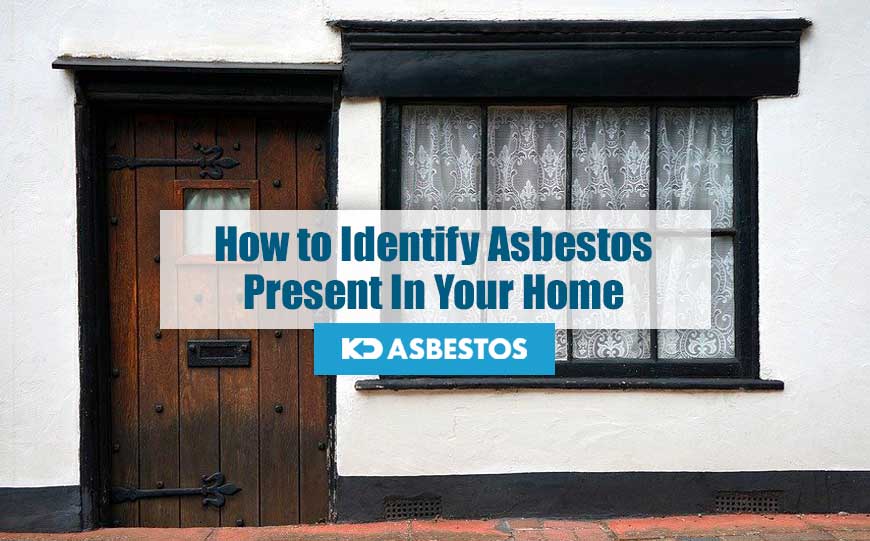 Did you know that every single day it’s estimated 13 people in the UK die as a result of being exposed to asbestos, so how do you identify asbestos in your home?

This number is shocking because you may not even be aware of the critical dangers associated with asbestos exposure.

However, this danger’s reality dates back to the end of the 20th century where it was found that lung cancer patients could be linked to asbestos exposure.

Later in 1999, a full ban on asbestos products was introduced.

The sad truth is that asbestos was widely used for construction, and as a result any residential or commercial building which was built before 1999 could be dangerous.

And it is estimated that more than half of UK buildings contain asbestos.

If disturbed or damaged, materials which contain different types of asbestos will release the asbestos fibres into the air, and when these are inhaled, dangerous health conditions can result.

Considering this, it’s important to be aware of the dangers of asbestos, as well as how you can identify its presence in a building where you live or work.

How To Find Out If Asbestos Is Present? 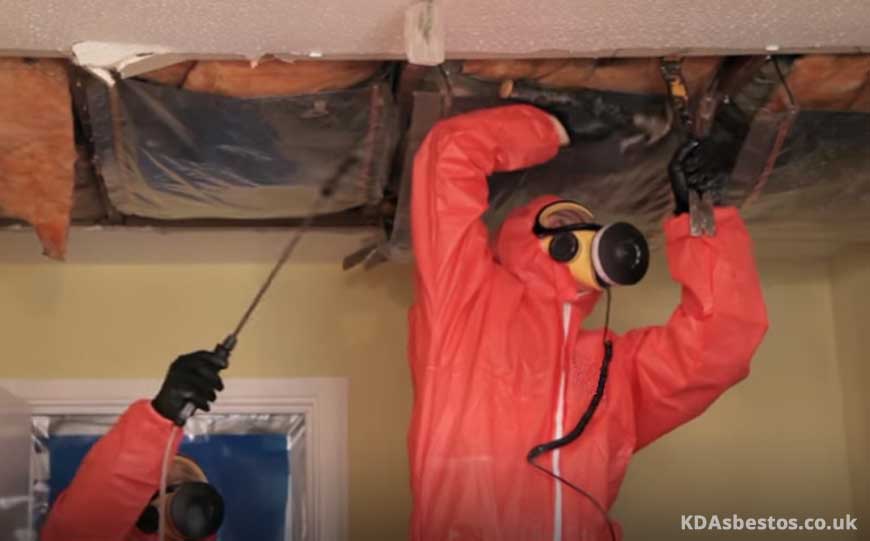 Asbestos can be found in a wide range of materials as it is durable, fire resistant, and relatively inexpensive.

As a result it was widely used in building materials, insulation, plumbing pipework, and roofing materials, to mention just a few.

If you live in a house that was built before 1999, there is a good chance that asbestos could be present.

This also applies to industrial and commercial premises that were built during the same period.

If you are a tradesperson and are entrusted with work in relatively old buildings which were built before the beginning of the 21st century, it’s important to be aware of the risks associated with asbestos.

This is because any disruptions that you might make during your work in such a building could lead to asbestos exposure.

Asbestos has been known to be commonly found in place such as:

Loft insulation was often made from materials containing asbestos between the 1920s and 1980s. So if you own a home that was built during that period, it’s recommended you have the material tested for asbestos before handling it.

Unknown to most people, many interior wall paints often contained asbestos up until as recently as the 1990s.

Most plasterboard and drywall which has been fire-protection rated is likely to contain asbestos.

Even carpet underlay and vinyl floor tiling was known to contain asbestos at some point.

Siding shingles and other siding materials were often reinforced with asbestos.

If wood stoves or fireplaces are present in your property, it’s best to be careful and carry out a test since fire resistant materials in older homes often contain asbestos.

Water heaters could also be dangerous as the insulation in these heaters could contain asbestos. This is also common with insulating blankets.

Cement pipes, gas and sewage pipes used to be built with asbestos back then.

These are dangerous considering that it is normal for such pipes to deteriorate over time, and hence asbestos fibres could be released in the pipelines.

Piping systems for boilers and furnaces could be coated with asbestos for insulation.

What To Do If You Suspect Asbestos Is Present 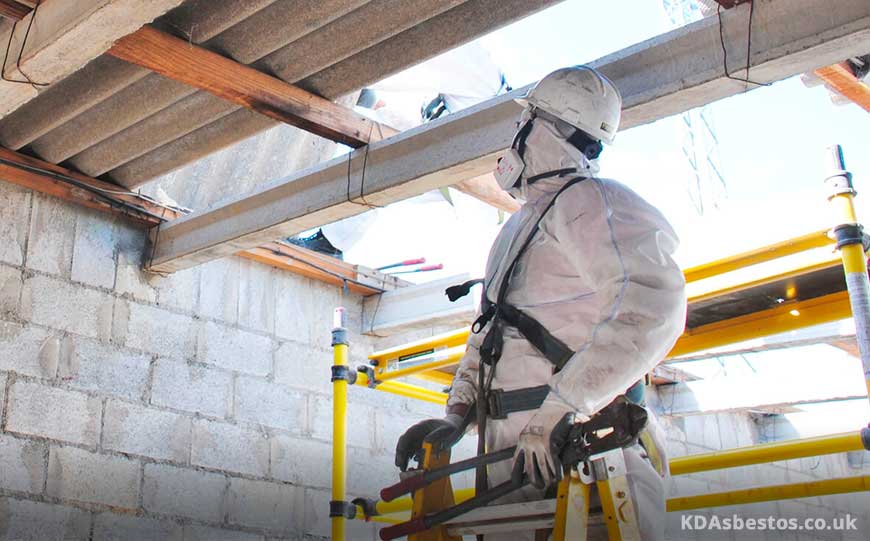 First of all, it’s important not to cause any kind of disruption to the materials prior to carrying out a test to verify whether asbestos is present or not.

It’s critical not to take this lightly as asbestos exposure could indeed be deadly.

There are home testing kits that can be used to extract samples from the building.

These are then used for testing purposes in a laboratory.

Results from a specialist testing lab will then be reported in a few weeks’ time.

Alternatively, you may wish to hire a professional asbestos survey specialist to carry out the necessary tests in the building. 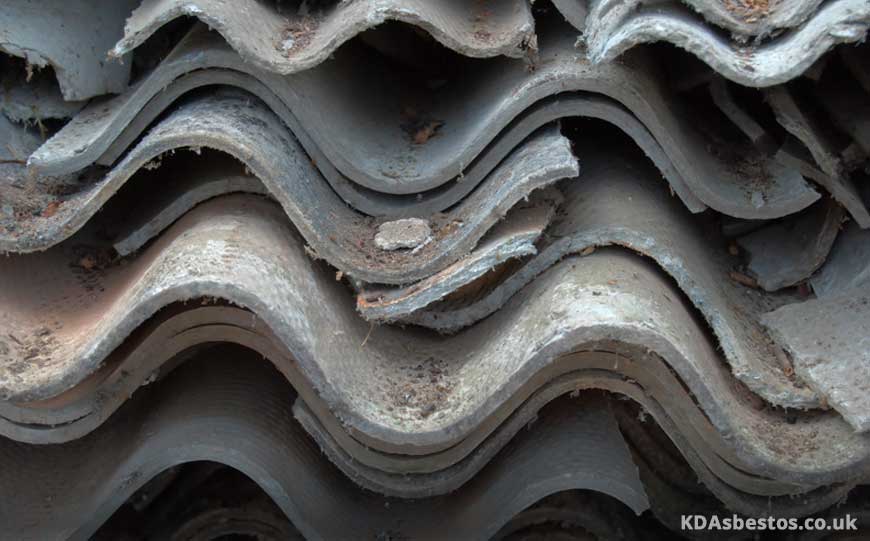 This is another important aspect to discuss while we are tackling the subject of asbestos presence in a building.

Friability is a term used to describe if a material containing asbestos is likely to break, or suffer from deterioration of some kind if subjected to pressure from an external source.

The more friable material is considered to be, the more dangerous the situation is, since it is more likely to have asbestos fibres being released in the air.

Naturally, these could then be inhaled by anyone in the surroundings.

Many asbestos-containing materials, or ACMs in short, are often classed as being friable.

This means that they can easily crumble or deteriorate if touched.

It can break down without much pressure at all.

Technically, a material is declared as being friable if it contains more than 1% of asbestos in weight.

If it is a material which is very fragile and easily damaged even if touched by hand.

Non-friable asbestos on the other hand, is relatively more durable than the former.

It is more resistant to damages, pressure or abrasions.

The probability that such materials break down and release asbestos fibres in the air is still present, but less likely than with friable asbestos.

Non-friable asbestos typically contains only a small proportion of asbestos, and so are considered to be low risk.

Generally in these cases, asbestos was only added to the particular materials to make it more durable, or to improve the level of safety at the time it was being used for construction purposes.

A common example of this situation is cement.

Until the late 1990s, cement had asbestos added to strengthen it further.

Sometimes asbestos cement products were marked with the letters ACM or A.C. to illustrate that they contain asbestos.

This is common with roofing tiles for example.

Even though only a tiny percentage of asbestos is present in such materials, it is still important to be careful.

Hence, it’s advisable that anyone working with such materials should always make a point of wearing protective equipment to be absolutely safe.

While non-friable asbestos materials are not likely to deteriorate or crumble as easily, it’s best that they are handled by a professional who is certified in the job of handling asbestos and well aware of its dangers.

How to Identify Asbestos Present

Asbestos fibres are not visible as they are microscopic.

So you cannot rely on visual analysis in order to identify the presence of asbestos.

The only way to check whether there is asbestos or not is to carry out the necessary tests on the materials at a certified asbestos testing laboratory.

It is also worth noting that commercial properties are required by law to undertake an asbestos audit.

This will include several lab tests on each of the materials in the property that is suspected to contain asbestos.

These specialised tests will also be able to establish whether the asbestos that is present is friable or non-friable in nature.

This information is obviously very helpful to determine the risks levels involved, and to shed light on how to deal with any materials in the building properly and safely. 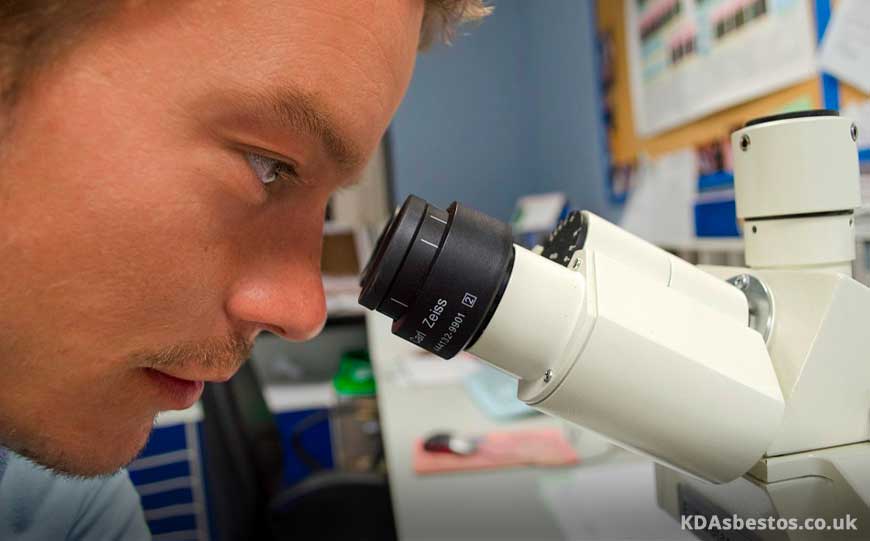 Specialist labs will be able to confirm for sure whether asbestos is present or not.

These labs utilise a type of transmission electron microscopy in order to reveal any asbestos fibres present in the material samples.

Any labs that carry out these tests will need to adhere to UKAS accredited laboratory (BOHS P401 qualified analysts) requirements.

These specific stringent requirements ensure that full compliance is present in the conduct of such testing.

This is in accordance with HSE’s (Health & Safety Executive) Control of Asbestos Regulation 2012.

These specialised labs will also need to ensure that they remain certified, and a full list of such labs is provided in the NIST accredited directory.

What To Do If You’ve Been Exposed To Asbestos 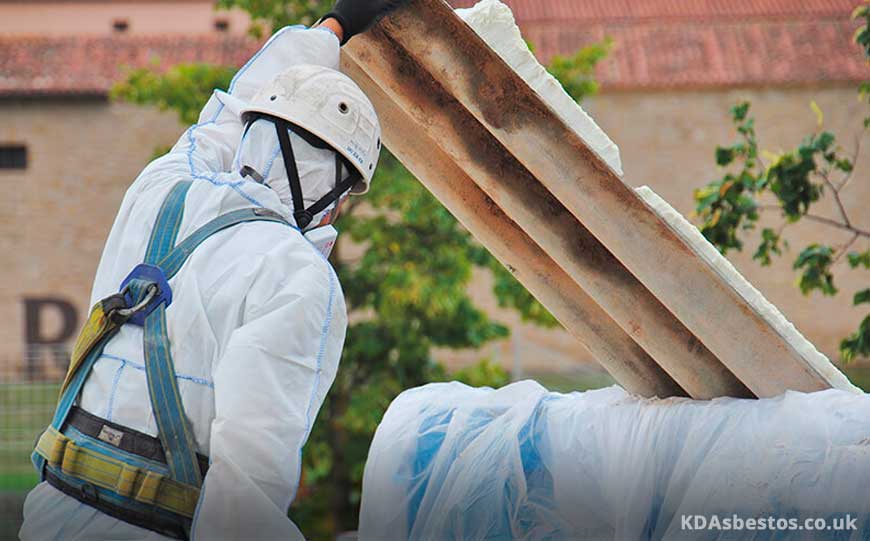 If you suspect that an area in your home or premises contains asbestos, and you were likely exposed to it, it’s important to take the following steps for safety purposes:

Pinpoint the location where materials that could have contained asbestos were damaged.

In case of non-friable asbestos, there is most probably no immediate danger, especially if there isn’t any visible damage.

Asbestos encapsulation is recommended in such cases, to seal any possible asbestos and prevent any asbestos fibres from being released in the air.

During this process any exposed asbestos is encapsulated with a specialist sealant.

However, if there are any non-friable asbestos materials that show signs of deterioration or damage, it is best to call a professional asbestos removal company to deal with the issue as soon as possible.

In case of friable material that is undamaged, it is still critical to have the asbestos disposed as quickly as possible.

Sealing the entire area is generally the best course of action.

You should make sure to stay away from that area and to have a professional deal with the matter as it is highly dangerous.

The next step is asbestos removal.

A professional asbestos removal company will have the necessary equipment, and employees who have received the necessary training to see to the problem as safely as possible.

Specialised respirators and personal protective equipment will be used throughout the whole procedure, and all materials will be destroyed after being removed.

This is because the risk of cross contamination is very high.

Asbestos should not be taken lightly, as the risks associated with it are very severe.

Always make sure to leave the matter in the hands of a professional asbestos removal company who will know what they are dealing with.

They will have the necessary expertise and equipment to ensure that the removal of the asbestos is carried out in the best possible way for the safety of everyone concerned.